Every Glenrothes expression has its own unique personality, with the distillery's characteristic flavour profile at its foundation: Ripe fruits, spices, citrus and vanilla, wrapped in the smoothest of textures and offering an ideal balance.


The understated rounded bottle is inspired by the Glenrothes classic sample bottle. It carries a minimalist label, which contains tasting notes, the year of distillation and bottling and the Malt Master's signature.


Established in 1878, with production commencing in December of 1879, Glenrothes started life under the management of banker Robert Dick, lawyer John Cruickshank and William Grant (another banker, not to be confused with the Glenfiddich/Balvenie William Grant).
The new distillery became Glenrothes-Glenlivet in 1884, just before the management trio amalgamated with the Islay Distillery Co. (owners of Bunnahabhain) in 1887 to become Highland Distillers Company (HDC).


The period between 1897 and 1923 brought many challenges. Two fires and an explosion that destroyed most of the distillery buildings created the need for much redevelopment, yet somehow managed to see Glenrothes emerge stronger each time, with capacity being doubled during the first rebuild in 1898.


After a few decades of quiet success, another boom in expansion began in 1963. Between this year and 1989, the distillery grew to housing ten stills and a capacity of over five and a half million liters per year. Within this period – and to date - the majority of Glenrothes' malt went into the Cutty Sark and Famous Grouse blends, with very few bottlings of the single malt available.


Nowadays, however, Glenrothes has a much higher profile. The distillery's acquisition in 1999 by The Edrington Group and William Grant & Sons (the other William Grant, the ones who own Glenfiddich & Balvenie) has resulted in a plethora of releases of Glenrothes since. This approach, along with the brand’s distinctive bottles and its rich, smooth, flavour profile, has contributed to the great success of Glenrothes since it changed management.


With Glenrothes claiming that “each individual cask of ours is carefully checked, nosed and tasted many times over many years, until perfect”, it is hardly surprising that their list of accolades is long. Over the past 10 years alone, Glenrothes expressions have won Double Gold Awards at The China Wine & Spirits Awards and the San Francisco World Spirits Competition a total of 3 times. They have also collected Gold awards from the International Spirits Competition and Scottish Whisky Masters, making theirs an impressive trophy collection!
…

Showing all The Glenrothes 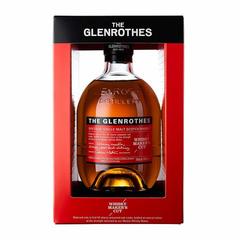